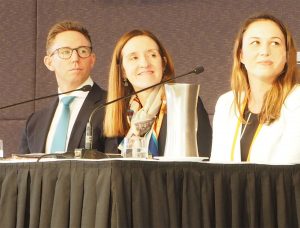 The Australian economy and share market are facing new headwinds in stark contrast to the rest of the world according to a panel at the Frontier Advisors annual conference.

Frontier Principal Consultant Greg Barr, chairing the panel on the impact of global markets on Australia, noted that Australia had equalled the 26-year record for continuous economic growth but had “fallen over the line” Steven Bradbury style with a weak 0.3 per cent quarter of growth.

AMP Capital Economist Diana Mousina said they expect annual domestic economic growth of 1.5-2 per cent – well below the RBA’s 2.5 per cent – which may force the RBA to cut interest rates again.

“We are in quite a slow patch of growth in Australia and we think that’s quite likely to continue for the next six months. The key risk we’re looking for next quarter is we get another poor print because trade numbers are likely to disappoint given all the impacts of the cyclone in March/April,” she said.

QIC Director of Research and Strategy Katrina King said the Australian economy has surprisingly muddled through in recent times with a housing boom, an upswing in terms of trade in commodity prices, and NSW and Victoria’s infrastructure projects.

“While we still have fairly sluggish consumer demand and business sentiment is improving, it’s certainly not been enough to fuel the economy – we’re just not sure where that impetus comes from and so what’s going to drive us forward.”

The Australian share market is also facing challenges with concerns about the overheated residential property market (particularly apartments in Sydney and Melbourne) and greater regulatory scrutiny on banks, including a new proposed bank levy.

Mousina said the banking sector has probably had its worst run but there is little positive news on the horizon. “It’s really hard to see upside for Australian banks as well given credit growth in Australia looks like it’s slowing quite sharply because housing lending is coming to a peak – we think the housing story in Australia will become much more negative over the next 2-3 years.”

King said ANZ, Westpac and NAB had posted soft results and it is unclear what the regulator’s desire for the sector to be “unquestionably strong” means for banks’ capital ratios.

“There is a general dialing up of regulatory attention on the banks now and I think that that is still going to be a bit of a headwind for bank equity, but we are also underweight senior bank debt.”

However, J.P. Morgan Asset Management’s, Kerry Craig, noted that the banks remain in good shape and continue to pay high dividends relative to cash and bond returns, which the market expects to remain low.

“That income push has been quite strong so that’s another reason you shouldn’t abandon these big dividend players.”

King said the Sydney and Melbourne property market is overvalued in the order of 30 per cent and a downturn could be sparked by macro prudential levers being tightened too quickly or an overly rapid reduction in offshore investment.

A property market correction “would certainly cause a mild recession” she said but the falling Australian dollar and a more flexible labour market means it would be relatively short.

However, Craig said many people have strongly entrenched views about the value of property, which will only be shifted by major reforms to capital gains tax or negative gearing.

“There’s just huge amounts of cash sitting around that can be allocated to housing should people see the opportunity to pick up an asset that looks quite favourable.”

Earlier, the conference heard from a number of investors from around the world who said global growth remains positive thanks to accommodative central bank policies and, while inflation is back on the agenda, there is no imminent threat of a breakout.

“It’s really hard to make money at the moment because no one knows which way things are going and it kind of looks like things will be in this ‘Goldilocks’ situation for a significant period of time,” Mousina said.

“One of the things that we’re watching is that we shouldn’t be expecting inflation, wages growth, GDP growth to come back to levels where they were before the GFC… I don’t think we should be waiting for inflation to get back to 2 per cent before we start normalising interest rates.”

Craig said volatility remains low because many of the risks, such as China’s growing debt, are issues that will play out over the next 3-5 years rather than six months.

“Those risks haven’t been removed, they’ve just been deferred to a big extent.”

King said QIC is carefully watching the next US inflation figures after a soft two quarters.

“If that is the third in a row that is weak it may start to challenge our base case views and make us question whether there’s something we’re missing even though we look like we’re at full capacity on employment.”