Global markets: challenges ahead but cause for optimism 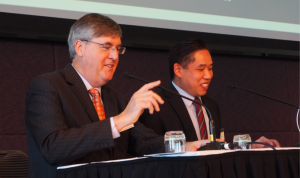 Investors are bracing themselves against a number of headwinds including lower potential returns for the foreseeable future, but Frontier Advisors says there is also some cause for optimism.

An audience poll at the annual Frontier conference found that the vast majority agreed that secular stagnation will be “very significant” or have “some impact” on global growth.

However, Frontier Consultant, Alvin Tan, said cash and bond markets had already priced in a secular stagnation scenario, implying much lower asset class returns – and that this was an overly negative response.

“It’s like a race to the bottom to keep rates low in this current environment but we don’t think that means secular stagnation, we just think it means rates might stay lower for longer,” Tan said. “When we do our analysis on the global growth story, we think you can still get reasonable growth, particularly from emerging markets.”

While many traditional investment relationships had broken down (such as the Chinese share market now driving the US share market), Frontier’s modelling suggests that global GDP growth could potentially still be around 4% a year over the next decade.

A panel of global experts presenting at the conference via video also suggested that fears of secular stagnation were overdone.

JP Morgan Head of Global Multi-Asset Strategy, John Bilton, said it was unlikely that a series of bubbles had masked very low level trend growth, with the possible exception of the housing bubble of 2007-08.

“I find it hard to believe that bubbles associated with globalisation, with e-commerce, with market liberalisation, didn’t all come with a lasting economic benefit.”

“The new normal seems to have taken over everybody’s psyche: slow growth – maybe that goes to no growth – and we think that maybe people are ignoring the fact that in the history of the world that innovation and technology can really raise all boats,” Barron said.

Emerging markets are also expected to be a key driver for global growth as the working age population in developed markets rises. Tan said GDP and earnings growth go hand-in-hand over the very long term but over 5-10 year periods that is not often the case – a situation which has occurred recently in emerging markets.

“Higher growth should mean higher risk asset prices in those economies but that didn’t prove to be the way for the last 10 years. So I think ultimately, though, the emerging markets are going to go through some problems in the coming couple of years.”

Frontier Senior Consultant, Anthony Michael, said there were several concerns about China, particularly its growing debt, but over the next three years the government has enough firepower to maintain economic growth at 6.5-7%.

“In the short-term China will muddle through – it still has room to lower reserve requirements, to cut interest rates, do some further investment spending, re-capitalise banks and re-finance Local Government debt into the Municipal Bond Market. The Government also has some room to implement further fiscal initiatives,” Michael said.

“However, beyond this time horizon they need a growth model that does not rely on ever increasing piles of debt”

The panel of global experts also suggested that the Chinese economy is unlikely to have a hard landing.

“On the one hand, policy makers may run out of ammunition,” said Qian Wang, an economist with Vanguard Asia Pacific. “On the other hand, we probably will see financial leverage continue to rise and that will make the economy and the financial system much more vulnerable down the road. So, the bottom line for me, is that in the near term, don’t panic, but in the medium term, do remain vigilant.”

Chris Helyar, Partner, LCP, put it another way: “Short term relax, but in the long term, say three or four years, if nothing changes, be ready to put on your tin hat.”

Australia’s fortunes are closely aligned with China – our largest trading partner – and its slowing economy quickly put an end to the mining boom which propped up the Australian economy through the global financial crisis.

However, the Australian economy continues to hold up well. Capital Group economist, Stephen Green, said that last year Chinese tourists spent $US215 billion around the world – an approximate 50% rise on the previous year.

“That pie is only going to get bigger and thanks to the blessings of geography, much of that spending on overseas tourism and education – and even real estate of course – will go into Australia. So the rebalancing for Australia is really not a rebalancing away from China but it’s a rebalancing to different parts of the Chinese economy.”

View the video responses from all seven economists here.