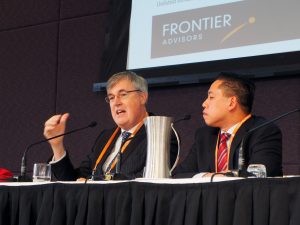 Super funds may be expecting lower returns as market and geopolitical uncertainty rises but now is not the time to abandon growth assets according to Frontier Advisors.

“We have a cautiously constructive view for the next 12-18 months on growth asset classes and remain overweight equities versus fixed income,” Michael said at the 9th annual Frontier conference.

“That probably puts us slightly at odds with some others out there – we recognise that there are tensions between current valuations and where we are in the economic cycle.”

Frontier’s research shows that stretched forward price-earnings ratios are poor indicators of short term returns but suggest weaker returns over the next 3-5 years.

A survey of the more than 100 conference attendees, mainly super fund executives and institutional investors, found that the majority (54%) expect balanced super funds to deliver returns in the 5.1%-10% range over the next year. Just over one-third (36%) expect returns to be in the lower 0-5% range.

The median balanced fund posted a strong return of 11.2% over the year ended April 30, 2017 according to SuperRatings.

“It suggests having more foreign currency because in both those scenarios we think the Aussie dollar will be a buffer in those risk environments.”

Frontier’s clients also tend to hold significant cash and alternative fixed income in their portfolios so they are ready to take advantage of short-term market pullbacks over the next 12-18 months.

A separate survey found that most conference attendees (47%) expect property and infrastructure to be the best performing asset class over the year ending April 2018 followed by emerging market equities (26%), developed market international shares (14%), and multi-asset strategies (10%). 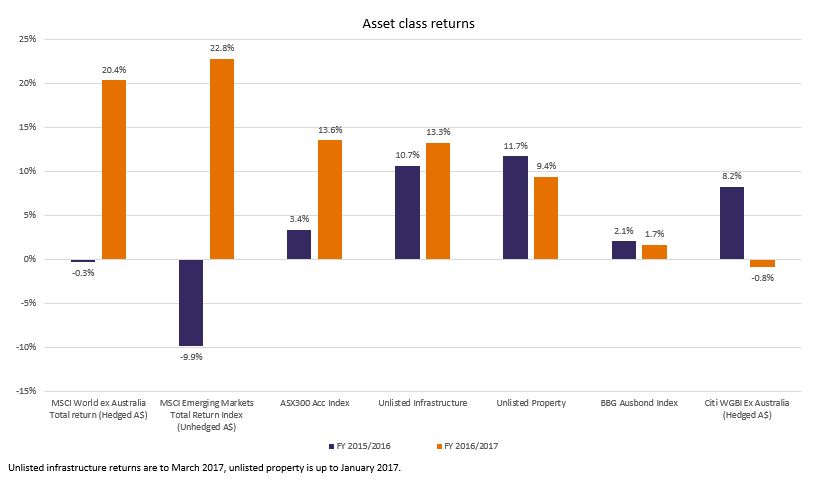 Just 3% of attendees pick Australian shares to be the best performing asset class amid concerns around residential housing prices, increasing regulatory pressure on banks, as well as China’s slowdown and its impact on commodity exports.

Tan said Frontier’s clients are more positive to emerging market equities, which have performed extremely well over the past year, than Australian equities.

A final survey of attendees showed that a significant number of investors think Trump will be a disaster but it won’t matter for financial markets.

Michael said the US economy is growing at around full capacity but the market still thinks the real Fed Funds rate, I.e. adjusted for inflation, will remain around zero for the next couple of years despite the Fed’s indications to the contrary.

“One could argue it doesn’t really need these fiscal stimulus to come through in 2017, 2018, and if anything if these policies all came through that would accelerate growth and inflation and probably force the Fed to tighten more aggressively and bring an end to this expansion probably sooner than later,” he said.

“With all this uncertainty now is probably not the right time for investors to be making big moves in their asset allocation – we don’t know what is going to come to pass under the Trump administration; we don’t know what the effects on the economy will be on any legislation that he will be able to pass,” said Hickey.

Hickey was one of nine investment experts from around the world interviewed by Frontier about the state of markets. There was a consensus view that the global growth story remains intact.

“We also need to recognise that cyclical assets have rallied quite a lot relative to last year. The biggest risk for us is interest rates – with equity valuations so high we really need central banks to be quite cautious in raising rates – the good news here is inflation so far has still proven to be lower than expected.”