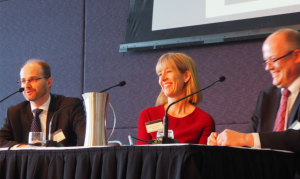 Australia’s resources boom has bust, but does the sector now offer value? And are the big banks headed for the same downfall that beset our mining companies? They remain key questions for investors with the resources and banking sectors comprising almost half of the local share market.

Two fund managers with opposing styles – value and growth – found common agreement on banks but were diametrically opposed on resources at the annual Frontier Advisors conference in June.

Lazard’s Philipp Hofflin has bet on resources after the sector reached a low point in January, losing 70% of its value against the rest of the market. The value manager has invested 36% of its portfolio in resources compared to the S&P/ASX 200 index weighting of just 14%.

“Five years ago we had not a single share in BHP, Rio, Woodside and these companies because the earnings were really wrong – commodity prices were not sustainable… but what has changed very dramatically is the price.”

Wavestone’s Catherine Allfrey, by way of contrast, has been underweight in the resources sector since 2010 and believes the sector over-invested during the 2003-2011 boom. The growth-at-a-reasonable-price manager holds just 6% of its portfolio in resources.

“They are all price-takers in terms of their business models so in our view we cannot see enough of that supply being soaked up.”

Frontier Advisors’ Senior Consultant, Fraser Murray, is head of the equities research team which conducts more than 250 Australian equity manager meetings each year, says both approaches can work for investors over the long term but with such substantially different positions in resources, one of these managers is likely to under-perform over the next 12 months.

“There’s probably one hero and one villain amongst the two of them,” he said.

Field Research’s Stewart Oldfield, who chaired the panel session, asked the question that many investors want to know: how long should they stick by an underperforming manager?

Murray suggested that, assuming the manager remained true to their investment style and could explain their reasoning, the focus should be on the organisation itself.

“When I see managers underperforming I’m looking for that business resilience both in a financial sense and also that the leadership is able to ensure that the investment team can endure and continue to do what they need to do to turn things around. That can be much more fragile than you think at times. It’s the time when leadership matters in funds management – not just investment leadership, but business leadership.”

Murray said Lazard was currently one of the bolder managers in relation to its resources position. By contrast, a vast majority of Australian equity fund managers were currently underweight banks because of rising bad debts and capital charges.

“That is the reason we sold our bank shares a couple of years ago – we were very concerned about the equity raisings that were coming on,” Allfrey said.

Lazard and Wavestone held just 11% and 18% of their portfolios in banks respectively – well under the S&P/ASX 200 Index weighting of 27%.

Hoffman said “When we look at these banks they present to us an asymmetric risk – there’s a fat tail if you will. That fat tail would involve a permanent loss of capital… we’re therefore not convinced that it makes sense to have almost a third of your Australian equity money in that one sector.”